The University of Michigan has long been known for its collection of Greek papyri from Egypt, which was acquired in the 1920s and is the largest in North America. Advanced training in reading and studying papyri is one of the leading strengths of the Department of Classical Studies; the necessary skills in reading Greek manuscripts of all kinds and all periods are taught at the graduate level on a regular basis. Papyri containing works by ancient philosophers are among the most exciting new materials that continue to appear: new texts include the Strasbourg Empedocles (1998) and the mysterious Derveni papyrus (2005).

Out of the Ashes is a documentary about work on the philosophical papyri from Herculaneum, a project which includes Professor Richard Janko. 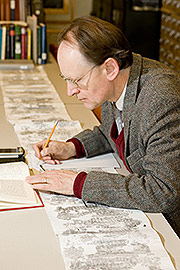 Professor Janko is an expert in the reconstruction of philosophical papyri.

The training in papyrology that Michigan offers relies on study of original materials, often unpublished, from our own Papyrus Collection, and in this digital age on the use of high-quality imaging of papyri that are elsewhere, including rolls from the (still partly unpublished) library of philosophical works from the Villa of the Papyri at Herculaneum.

New technology is enabling these works to be read and reconstructed far more accurately than in the past, and the Philodemus Translation Project, based at UCLA, Oxford, and Michigan, is continuing to pioneer this work. (Its latest volume, Philodemus, On Poems 3–4, with the Fragments of Aristotle, On Poets, appeared in 2010, with help from more than one graduate student in our program.)

For detailed information on the new technologies in development for studying papyri, see “Over the Shoulders of the Ancients” (PDF), especially the last two pages, and R. Janko, “The Herculaneum Library: Some Recent Developments” (PDF).

Professor Janko’s Greek paleography course regularly includes an introduction to working on these papyri. Students are encouraged to travel to Europe to work on philosophical manuscripts, including both Medieval codices and those from Herculaneum. There are continuing links with the International Center for the Study of the Herculaneum Papyri (Centro Internazionale per lo Studio dei Papiri Ercolanesi) in Italy, to which students may apply for scholarships to study in Naples.